Angeekritam. Obeying that order from Sri Krishna and ready to implement His order, He was extremely pleased and gave liberation (Mukti) as your assistant and Knowledge (Gyana) and Detachment (Vairagya) as your sons.

Interpretation: Sri Krishna’s brief for Bhakti was to go to the earth and rejuvenate His devotees and help them attain Moksha or Mukti (salvation). Thus, Mukti was Bhakti’s assistant. Gyana (knowledge or wisdom) and Vairagya (detachment) were Bhakti’s two sons.

This lays the path of a pilgrim’s progress. First, unalloyed bhakti that would lead a devotee to wisdom and then logically to detachment. Once the stage of detachment comes, the next step is Mukti. Here, Mukti is often misunderstood as the end to the cycle of birth and death. But, in reality, detachment is a stage when one is not affected by worldly pleasures or sorrows. It is a state of bliss. This is what the yogis try to attain.

Poshanam.In your original form, you have been serving the devotees in Vaikuntam and in order to especially serve the bhaktas on earth, you created your reflection.

Muktim.You descended on earth along with Mukti, Gnanya, and Vairagya and lived happily and contended in the three yugas of Krita, Thetra and Dwapara.

Kalouv.In Kaliyuga, the growth of disbelievers resulted in the decline of the power of Mukti. On your orders, Mukti was sent back to Vaikuntam.

Interpretation: In Kaliyuga, very few aspired to attain Mukti. This was due to the abundance of worldly pleasures.

Smritha.Whenever you think of Mukti, she appears on earth, but you chose to give shelter and protect your two sons.

Interpretation: However, even in Kaliyuga, there would be few who aspire for Mukti. Hence, Mukti is brought back on need basis.

Upekshataha.Due to the properties of Kali, nobody cared for your two sons Gnyana and Vairagya and therefore they became infirm and old. Yet do not get worried over this. To bring back to their original form, I need to think.

Interpretation: In Kaliyuga, nobody is interested in wisdom or detachment. This is because most of the time, Bhakti is just half-baked devotion. There may be plenty of godmen, but very few true bhaktas. 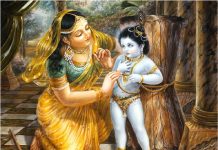