The Mahabaleshwar Temple, Gokarna is a Hindu temple located in Gokarna, a Hindu religious pilgrimage centre in Uttara Kannada district in the Indian state of Karnataka.

A Pranalinga (Pranalinga is defined as ?the reality of God which can be apprehended by the mind.?) also known as Atmalinga or Shiva Linga is deified in the temple, which is facing the city beach of the Arabian Sea in Gokarna. The Shiva Linga has a hoary legend.

It is said to bestow immense blessings to devotees who even glimpse it.The temple is considered as pious as the Shiva temple at Varanasi or Kashi in North India on the banks of the Ganges River and hence is known as the Dakshin Kasi (South Kasi). The temple, built in a classical Dravidian style of architecture, was first constructed by Mayurasharma of the Kadamba dynasty, who ruled between 345 ? 365.

This king wanted to gain knowledge of the Vedic rites and the Ashwamedha Yagna (a horse sacrificial ritual), so he travelled to Kanchipuram, a major learning centre, but on reaching there, was insulted by a horseman guard and angry, he swore to defeat the Pallava dynasty (the then ruling dynasty). Following their defeat, the king asked a few priests to perform a daily yagna to maintain his suzerainty over the region.

His son, King Kangavarman brought more Brahmin families from different lineages to maintain administration at the temple. Kalidasa mentions the ‘Lord of Gokarna’ in his Raghuvamsha of the 4th century.

The Gokarnam shrine is one of the Paadal Petra Sthalams of the 7th century Tevaram canon. Visvesvaraya of Halasunadu-Kundapura built the Chandrasala and Nandi pavilions when Queen Chennammaji and her son Soma sekharanayaka were ruling Keladi (1653-1671). The temple is a large complex of shrines and much of it belongs to the later Vijayanagara period.

In 1665, Shivaji came here to worship the deity. According to the legend, the Atmalinga was perforce placed at Gokarna, in the temple precincts where it is now deified, by Ravana, the demon King of Lanka of epic Ramayana fame when he carried it from Mount Kailash in the Himalayas.

Pilgrims take a holy dip in the Arabian Sea before visiting the temple for worship. It is one of the seven sacred Muktikshetras or Mukthistala (place of salvation) in India where many Hindus of Karnataka perform obsequies (death rites) for their departed six other Muktistalas in Karnataka are Udupi, Kollur, Subrahmanya, Kumbasi, Kodeshvara and Sankaranarayana.

At a distance of 58 km from Karwar, 75 km from Murudeshwar, 21 km from Ankola, 165 km from Hubli, 163 km from Panjim and 514 km from Bangalore, Gokarna is a small town in the Uttara Kannada District of Karnataka. It is a famous pilgrimage center and also a tourist spot because of its beautiful beaches. The prime attraction of the Gokarna is the Mahabaleshwar temple which houses the Atmalinga. The Atmalinga was given to Ravana by Lord Shiva himself. Ravana was stopped here for his evening prayers while going back to Lanka. He had been instructed by Lord Shiva not to keep the Atmalinga on the ground, since it would be fixed wherever it touched ground. Atmalinga was a powerful weapon and devatas did not want Ravana to get such a powerful weapon, fearing destruction. Lord Ganesh took the avatar of a boy and offered Ravana to hold the Atmalinga during his prayer. Ganesha then kept the linga on ground before Ravana comes back from prayer. Ravana, in extreme anger, tried to pull out the Atmalinga from the ground, breaking it in the process. These pieces then resulted in the establishment of various temples in Karnataka. Besides Mahabaleshwara temple, there are other prominent temples here including Maha Ganapathi temple, Bhadrakali Temple, Varadaraja temple and Venkataramana temple.

The name of the town Gokarna is derived from two words, Go and Karna, which means cow’s ear. According to mythology, Lord Shiva appeared from a cow’s ear, after he was sent to Patal Lok by Lord Brahma. Some believe, the town is located at the confluence of two rivers Aganashini and Gangavali, and the place where the rivers converge forms a shape that is similar to the ear of a cow, hence the name Gokarna. Gokarna was under the rule of the Kadambas, Vijayanagara kings and was later conquered by the Portuguese.

Apart from being a religious town, Gokarna is also known for its beaches. There are many beautiful beaches located close by, which have small shacks serving as accommodation along with many small shops and modern eateries. The Om Beach, Kudle Beach, Gokarna Beach, Half Moon Beach and Paradise Beach are the five main beaches here. Gokarna Beach is the town’s main beach and pilgrims gather here when they visit the Mahabaleshwar Temple. The Kudle Beach is the largest of the five beaches and it is crowded during the peak season November to February. Among the beaches in Gokarna, the Om beach is extremely popular among surfers. The beach gets its name due to the natural formation of the holy Om symbol.

Gokarna is considered to be the Mukti Stala, where Hindus perform funeral rites. Devotees visit Gokarna on large number during the Mahashivratri festival (February / March). The entire town is decorated during the four days of the festival and the temple deity is taken out in a procession. Kartika mahotsava (November) is also celebrated in a grand style in Gokarna.

Best time to visit is Oct to Mar.

How To Reach Gokarna 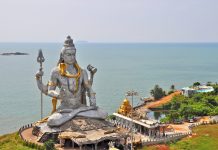