On the occasion of Mahashivratri, devotees perform Jalabhishek and Rudrabhishek to please Lord Shankar. Preparations are complete in all Temple in Gorakhpur and special preparations have been made in Jharkhandi Mahadev Mandir. Pandit Awadh Bihari Shukla says that this time a rare coincidence is being made on Mahashivaratri. After 130 years, this yoga is being formed in which Sarvartha Siddhi Yoga and Amrit Siddhi Yoga are being found. In such a situation, worshipping Lord Shankar on Shivaratri has special significance.

Pandit Awadh Bihari Shukla said that this time on the occasion of Mahashivaratri, devotees must offer 80 grains of rice and 80 letters to Lord Shankar. This will fulfill all the wishes of the devotees.

The story of Shivalinga of Jharkhandi Mahadev Temple is quite interesting

Priest Shambhu Giri, who is worshipping at the Jharkhandi Mahadev temple, says that Lord Shiva’s Shivalinga was revealed in this temple. He says that there used to be jungles in this area earlier. It was a deserted area and woodcutters used to cut wood from here. One day a woodcutter was cutting wood when his axe hit a stone, after which a stream of blood started coming out of him, which scared him. The number of times the woodcutter tried to bring the Shiva Linga up, it was going to sink down. The woodcutter told the people around it about the incident. The same night, the landlord had a dream that Lord Shiva has appeared here, after which the pooja recitation started here. Since then, pooja lessons continue here till today. It is believed that whatever devotee comes to this temple and asks for something,

Kumbh Mela 2021: First royal bath of Kumbh Mela to be held on Maha Shivaratri on March 11, know its importance 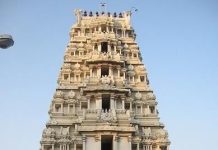