Located at Tirunelveli town in Tamil Nadu, Nellaiappar Temple is a Hindu temple dedicated to the Lord Shiva. The Lord Shiva is worshipped here as Arulmigu Swami Nellaiappar (also called Venuvananathar) represented by the lingam and his consort Parvati is depicted as Arultharum Kanthimathi Amman. The temple is located on the northern banks of Thamirabarani River in Tirunelveli district. Also known for its Musical Pillars and other Brilliant Sculptural Splendours, this is one of the largest temples in South India.

History of the Nellaiappar Temple

It is believed that Pandyas built the original complex, though the present structure was modified by Cholas, Pallavas, Cheras, and Madurai Nayaks.  In the 7th century AD,  Nindraseer Nedumaran constructed the sanctums of the temple , the gopurams and the mani mandapam. The flag stand near the Nandi was set up in 1155. Later Pandya, Kulasekara Pandyan I built the outer wall of the Thirunelveli Nellaiappar temple, in 13th century.

Architecture of the Nellaiappar Temple

The temple compound consists of two huge temples, one for Lord Shiva (Nellaiappar temple) and the other for his consort Parvathi (Kanthimathi Ammai temple). These two temples are linked by a big terraced hall namely Sangili Mandapam built on 1647 by vadamalaiyappa pillayan. The main deity of Kanthimathi Nellaiyappar Temple is a ‘Suyambu Lingam’ or a Shiva Lingam which erupted from underneath the earth. The Nandi mandapam has a fairly big statue of Nandi (the bull God), similar to those at Tanjore and Rameswaram . The unique feature of the temple is the ‘Mani manadapam’ located near the nandi mandapam with two giant pillars carved out of a single stone and each one is having 48 sub pillars which produce musical notes when struck. The total are covers an area of 14.5 acres measuring 850 feet long and 756 feet wide.

2)  The Bhrammotsavam here lasts for an extended period of time during the Tamil month of Aani (June 15 – July 15).

3) Also, A Golden Temple Car will run during important festivals like

4)  During Thaipoosam Festival in Thai, Lord Shiva and Parvathi are taken to the banks of Thamirabarani River in Tirunelveli junction called “Thaipoosa Mandapam”. Special rituals are undertaken there and the Lord returns to the temple at night.

How to reach the temple:

Tirunelveli city is well connected to all other major cities via road and railways.

Nearest airport is at Tuticorin Airport which is only 41.2 Km away.

Nearest railway station Tirunelveli Junction  is only  5 Km away from the temple.

Nearest Bus Stand is Tirunelveli Bus Stand. Once each to Tirunelveli auto, cabs and local buses are available to reach the temple. 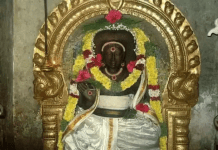 Ganesha is Portrayed With the Face of a Man, Not an Elephant! Do You Know Where This Temple Is?