The building, which will be used for Hindu worship, festivals and community events, would be constructed on the Tattenhoe estate using recycled shipping containers painted orange.

The planning request is due for consideration by Milton Keynes councilors on October 8, but has already been recommended for approval, subject to conditions, by council planning officers.

Conservative Tattenhoe Councilor James Lancaster is one of a number of protesters who voiced their objections.

He said: “This design stands out for the look of a cheap solution … It’s not pretty and sadly, it looks exactly like a set of painted shipping containers. No marine paint can hide this.

“The shape of the shipping container painted in rust orange does not fit the area and it is quite high in a very prominent position.”

The application comes from the London Shirdi Saibaba Temple Association (SHITAL) who bought the St Agnes Way site at a discounted price of around £ 400,000(3.70cr) from the Milton Keynes Community Foundation.

But residents say the temple would cause parking and traffic chaos throughout the area, particularly during holidays, Hindu weddings and other special events.

They also say there is a clear conflict of interest with the adjacent sports hall and nearby schools.

The planning request was withdrawn earlier this year after residents raised these concerns, but it has now been resubmitted and slightly modified.

Cllr Lancaster is requesting this week that the October 6 meeting be postponed fifteen days to give residents more time to gather their new objections.

He said additional information was added to the planning request in August, but that people were only informed last week.

“It is incredibly alarming that the MK Council has not been able to communicate with residents important details about a meeting in which a contentious planning request is submitted,” he said.

“Conservatives feel that local residents are not being given enough time to formulate a response as the council has not properly informed them of the meeting date, even though it is less than two weeks away.”

Currently, the council has received 470 submissions from third parties on the temple plan. Of these, 319 in support of the request and 142 in opposition.

A petition with 597 signatures objecting to the proposed development has also been received.

Thoughts By Chanakya To Achieve Success! 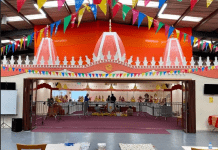