Sri Varaha Lakshmi Narasimha Temple, Simhachalam is a Hindu temple located in the Simhachalam Mountain Range, which is 300 meters above sea level in Visakhapatnam, Andhra Pradesh. It is dedicated to Vishnu, who is worshipped there as Varaha Narasimha. According to temple legend, Vishnu manifested himself in this form (lion head and human body) after saving his devotee Prahlada from an assassination attempt by the latter’s father, Hiranyakashipu. Except in Akshaya Trutiya, the idol of Varaha Narasimha is covered with sandalwood paste throughout the year, which makes it look like a linga.

Simhachalam is one of the 32 Narasimha temples in Andhra Pradesh that are important pilgrimage centers. It was considered as an important center of Vaishnavism in the medieval period along with Srikurmam and others. The oldest inscription in the temple is from the 11th century AD. and records the gift of a private individual in the era of King Kulottunga I of Chalukya Chola. Narasimhadeva I, king of the eastern Ganges. Later it received the patronage of many royal families, among which the Tuluva dynasty of the Vijayanagara Empire stands out. The temple suffered 40 years of religious inactivity from 1564 to 1604 CE. In 1949, the temple became the province of the state government and is currently administered by the Simhachalam Devasthanam Board.

The Simhachalam temple resembles a fortress from the outside with three outer courtyards and five entrances. The architecture is a mix of Kalinga, Chalukyas and Cholas styles of architecture. The temple faces west instead of east, signifying victory. There are two temple tanks: Swami Pushkarini near the temple and Gangadhara at the foot of the hill. The temple houses several secondary shrines and some mandapams. The religious practices and customs of the temple are formulated by the Vaishnavite philosopher Ramanuja. They are modeled after the Satvata Samhita, one of the 108 texts of the Pancharatra Agama.

Simhachalam is the second largest temple, after Tirumala in Andhra Pradesh, in terms of earned income. [Citation needed] Devotees believe that the deity is capable of giving offspring to women and fulfilling the wishes of devotees. Kalyanotsava and Chandanotsava are the two main festivals held in the temple, followed by Narasimha Jayanti, Navaratrotsava, and Kamadahana. The festivals celebrated in Simhachalam are influenced by Dravida Sampradaya. Apart from those of well-known poets, the temple is found in many literary references and lyrical works (dedicated by anonymous writers), which are kept in the Government Oriental Manuscript Library, Chennai.

The Sthala Purana (local legend) of Simhachalam consists of 32 chapters; the number denotes the manifestations of Narasimha. According to Dr V. C. Krishnamacharyulu, the legends of Simhachalam and other Hindu temples in Andhra Pradesh were written in the 14th century after the attempted establishment of Islam in the region. He added that the writers wrote the legends inspired by the Narasimha stories available in the Hindu Puranas. Therefore, Vishnu Purana and Bhagavata Purana from the main sources. However, the legend of Simhachalam provides new information about the former life of the temple’s founder, Prahlada. The first four chapters of the legend cover the importance of Simhachalam, his deity, and the main body of water Gangadhara.

Simhachalam can be accessed by road from Simhachalam Bus Depot by APSRTC city buses, which is 4.4 kilometers, or by Simhachalam Temple Bus Service. APSRTC operates frequent buses from Dwaraka RTC complex in Visakhapatnam city which is 19.9 kilometers to SimhachalamTemple.

The nearest airport is at Vishakhapatnam, which is well connected with flights from all major cities. 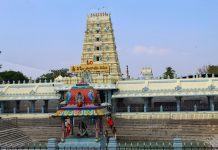