Srikalahasti Temple is located in the town of Srikalahasti, in the state of Andhra Pradesh, India. It is one of the most famous Shiva temples in South India and is said to be the site where bedara kannappa was ready to offer his eyes to cover the blood flowing from the Siva linga before Siva stopped him and granted him moksha.

Sri Kalahastheeswara Swami Vari Temple is one of the oldest and most historic Saivet temples in India. Vayu is incarnated as Lord Shiva and worshipped as Kalahastheeswara.

Here the goddess Parvathi Devi is worshipped as Gnanaprasunambika. The temple is located in Srikalahasti, Chittoor district, Andhra Pradesh. The vast west-facing Kalahastheeswara Temple is built on a hillside and on the banks of the Swarnamukhi River. At some points, the hill serves as the wall of the temple. The temple prakarams follow the contour of the adjoining hill, and therefore the temple plan is quite irregular. To the north of the temple is Durgambika Hill, to the south is Kannappar Hill and to the east is Kumaraswamy Hill.

Rahu-ketu Pooja is very famous in Sri kalahasti. Rahu Ketu Pooja will take place during Rahu Kalam hours. Devotees should plan accordingly, so that they are available during Rahu kalam time in the temple. Sri Kalahasti Temple is always full of Rahu ketu Pooja, with devotees coming from different parts of the country.

According to ancient Tamil sources, Sri Kalahasti has been known as the ‘Kailas of the South’ for a little over two thousand years and the small river on whose banks it sits, the ‘Ganges of the South’. Kailas is perhaps the most revered spiritual river in India. symbol. It is the abode of Shiva, from whose head, according to legend, the Ganges is said to flow. Shiva, “that which is auspicious in all places, times and circumstances” is a symbol of the Self and the Ganges that flows from his head represents the spiritualized or awakened mind. A mind that comes from the Spirit is a river of immeasurable power and life-giving goodness. The claim that Kalahasti is the “Kailas of the South” simply means that the small hill near the temple is to be taken as the spiritual equivalent of the Kailas of the Himalayas.

The Vedas propose four ends for which human beings strive in their pursuit of happiness: pleasure (kama), security or wealth (artha), duty (dharma) and freedom (moksha). In the Kalahasti temple, these four universal motivations, which can take any mundane form, become, according to temple literature, spiritual impulses. They are represented by four deities facing each other in the four cardinal directions. Shiva in the form of Dakshinamoorthy represents desire, in this case the desire for liberation, although it is more commonly said to represent the feeling of wealth (dakshina) that arises when you know who you really are. In Kalahasti, the Goddess Gnanaprasoonamba (the giver of knowledge or the mother of all knowledge) represents “wealth”, that is, freedom from the limitations conferred by Self-knowledge.

The deity Kalahastheeswara (the lord of Kalahasti) faces west and symbolizes liberation. Liberation, the death of the ego after the rediscovery of the Self, is the final stage of life, just as setting is the last act of the sun before it disappears over the horizon. The Tamil Cholas and the rulers of Vijayanagara have made various donations to this temple. Adi Sankara is said to have visited this temple and offered worship here. There are Chola inscriptions in this temple dating back to the 10th century AD. The Telugu poem ‘Sri Kalahasti Satakam’ explains the traditions associated with this temple. Muthuswamy Deekshitar, one of the main composers of the Karnatic Music Tradition, has sung the glory of this temple in his kriti ‘Sree Kaalahastheesa’.

Krishnadevaraya built a huge gopuram in 1516, just a few meters from the temple entrance. The entrance to the temple is crowned with a smaller tower. There is an underground shrine of Ganapati in the outer prakaram, while in the innermost prakaram are the shrines of Shiva and Parvathi. This ancient gopuram above the main gate, which is 36.5 meters (120 feet) high and the entire temple is carved

During the early days of creation, Lord Vayu performed penance for thousands of years with “Karpoora lingam” (Karpooram means camphor). Satisfied with his penance, Lord Siva manifested before him and said, “O Vayu Deva! Although you are dynamic in nature, you stood here without movement and did penance for me. I am satisfied with your devotion.” Lord Vayu said, “Swami! I want to be present in all parts of this world. I want to be an integral part of every Jiva who is none other than the manifestation of Paramathma. I want to name this Karpoora Linga, who represents you, after Samba Siva said, “You are qualified for these three gifts. According to your wish, it will spread throughout this world. Without you, there will be no life. This linga of mine will be known forever through your name, and all Suras, Asuras, Garuda, Gandharvas, Kinnaras, Kimpurushas, ​​Siddhas, Saadhvis, Humans and others will worship this Lingam. “Lord Shiva disappeared after bestowing these Don

How to Reach Srikalahasti

It takes about 5 hours by road to get to Tirupati from Bangalore. Both KSRTC and APSRTC operate buses during the day and night. It is about 3 hours by road from Chennai to Tirupati. Frequent buses are available from CMBT Chennai. APSRTC has buses plying very frequently (every ½ hour) from Tirupati to Sri Kalahasti. It also operates a special package called Yathra darsini and Divyadarsini.

Through railways there is a railway station at Sri Kalahasti. Srikalahasti is on the Tirupathi-Vijayawada broad gauge rail route and all express trains have to stop at Srikalahasti. It is well connected to all major cities in south India directly. 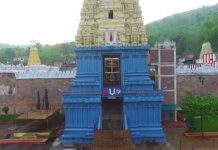