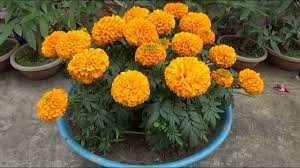 The spiritual meaning of marigold flowers

marigold flowers are very popular in Indian life, weddings, and festivities because they represent the sun, symbolizing brightness and positive energy. Both yellow and orange marigolds are widely used in traditional Indian wedding decorations. The spiritual meaning of marigold flowers is found mainly in Hinduism, but also in Christianity.

“Torana” means gateway in Sanskrit (तोरण – and is related to “gate” and “tor” in European languages). A garland made of mango and marigold is used as a Torana in Hindu homes. The garland hangs over the threshold. This garland is changed on every festive occasion.

An important reason for using the flower as a Torana is that it has protective properties, it has a pungent odour that keeps pests at bay (these properties have been well documented by researchers). That is why it is particularly useful in the tropical climate of India. It also keeps insects separate from murtis and, as a garland, from people.

In Tamil, the flower is known as camanti.

In both Christianity and Hinduism, calendula has a lot of spiritual significance.

The flower is offered to Mother Mary on the Feast of the Annunciation (March 25 of each year). This is the day that the angel Gabriel approached Mother Mary to inform her of the coming of Jesus Christ. On this day, in some traditions, marigold seeds are planted in pots as a symbol of auspiciousness and patience to wait for the divine.

Also in Hinduism, the flower symbolizes goodness. The color saffron/orange signifies renunciation and is therefore offered to God as a symbol of surrender. When offering the flower, it should also be remembered that the marigold is a very hardy flower and has a strong and erect stem (hence the scientific name “erecta”); in fact, the Sanskrit name for marigold is Sthulapushpa, which means this. It symbolizes trust in the divine and the will to overcome obstacles. This is also why the flower becomes so important in Vijayadashami, the day Lord Rama defeated Ravana.

They are also associated with Lord Vishnu and Goddess Lakshmi, who is considered an ideal match in Hindu mythology.

In modern times, the flower had been chosen to symbolize the loss of life of the Indian soldiers who participated in the World Wars. It became the symbol of India’s sacrifices as the world marked the centenary of the end of the First World War on November 11, 2018.

“It was felt that there was a great need for India to have a uniquely Indian symbol that could enable the citizens of India, as well as the international diaspora, to recognize the courage and sacrifice of the Indian armed forces in the service of the nation. including those who fell in the two world wars, ”said Sqn. Ldr. Rana T.S. Chhina (retired), Secretary of the Armed Forces Historical Research Center of the United Service Institution of India (USI).

In keeping with this, the “India Remembers” project initiated by USI proposed that the marigold flower be joined with the poppy as a uniquely Indian symbol of remembrance.

Marigolds are a low-maintenance annual plant that can bring the colour of the sun to your garden. They keep flies away but attract butterflies, bees, ladybugs, and other beneficial insects. Give them full sun and some well-drained soil and watch them bloom from late spring through fall.

Calendula seeds germinate quickly, in just a few days, and bloom in about 8 weeks. This quick victory makes them a great first-time landscaping project for kids and new gardens, not to mention new gardeners. Marigolds are a great defender in your garden and can help protect your vegetables from predators and pests.