Like Chanakya Neeti, Vidura Neeti focuses on an individual’s life. A person should never be jealous of these things, says Vidura. What are those things? According to Vidura, do you know what things we should not be jealous of?

During the period of Mahabharata, the great philosopher and ethicist Mahatma Vidura was considered an incarnation of Dharmaraja. He was also a general minister for the Kauravas and Pandavas as his advice was respected by all. Apart from the knowledge related to politics, he has made many policies related to human life for the welfare of human beings. Similarly, in one verse, Mahatma Vidura speaks of the essence of a happy life. According to him, he is considered an incurable patient if he is jealous of these things of others. A great war like the Mahabharata took place because Duryodhana was jealous of these things of the Pandavas. Do you know what those things are?

These things will fade over time

Such people get respect everywhere

Vidura has said in his righteousness that even if a person is not born into a high family, everything will be accomplished if he works hard and always moves towards his goal. Though Karna grew up under Adhiratha, he became a great archer and the king of Angadesa by his hard work. From it he earned respect everywhere. A person who progresses in adverse situations achieves success and is considered courageous; such a person receives respect everywhere.

Such actions should always be done

Vidura said that a person should always be happy and make others happy. Those who are happy with themselves and give respect to others will receive respect everywhere. That is why one should not be jealous of one’s respect because happiness and luck depend on human karma and they get it only on the basis of karma.

These people are always ahead

Such people always follow common sense. They are ahead in everything and deserve respect. In Mahabharata, Duryodhana would have been respected everywhere if he acted according to his intelligence, but after listening to his father-in-law’s words, he did his thing and acted without thinking, so that his end was terrible.

At the end of the shloka, the Mahatma Vidura has said that wealth, happiness, power and luck come only to those whose conduct is noble. Due to these things Duryodhana was always jealous of the Pandavas and jealousy became an incurable disease for Duryodhana. It is said in the scriptures that jealousy gradually destroys a person and leaves him nowhere. That is why one should never be jealous of anyone and have a sense of contentment, otherwise one will have to suffer without sleeping at night. Vidura says leave these 2 habits to progress in life 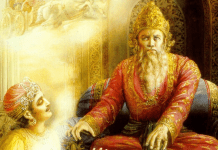 Vidur Neeti: How to save and manage money?

Vidur Neeti says that life becomes blessed by serving these five, respect is received all around According To Vidur Neeti Those People Who Have These 6 Habits Never Get Happiness In Life.!