The Attukal Bhagawathy temple, one of the very old temples of South India, is popularly known as the Sabarimala of the Women. One of the arguments in favour of not allowing women of reproductive age to enter Sabarimala was that, in the case of Attukal, only women were involved during the festival.

The story goes that Kannaki, the famous heroine of Cilappatikaram (the earliest Jain Tamil epic) after destruction of Madurai, traveled via Kanyakumari, stopped at Attukal, on her way to Kodungalloor. I am, myself, not aware of this epic, but some of my readers may be aware of it. Attukal Bhagawathy is supposed to be the divinised form of Kannaki, the incarnation of Parvathy, the consort of Lord Shiva. The Goddess revealed herself to a fervent devotee of the Mulluveetil family. The Temple was built in that consecrated spot to house the Goddess.

It is quite clear therefore, why this temple is such a harmonious combination of both Kerala and Tamil types of architecture. The image attached with this write up will highlight this combination of architectures. There are several beautifully carved figures of Goddess Kali, Parvathy, Lord Siva, and many depictions of Goddesses in and around the Temple. Presented around the corridors surrounding the temple, are the depiction of various other Gods and the epic stories of the ten incarnations of Lord Vishnu, the “Dasavathara”. On either side of the elegant front gopurams – are the icons based on the story of Goddess Kannaki. On the southern Gopuram, the puranic story of “Dakshayaga” is depicted in sculptures.

installed stones. The second idol of the Goddess is installed besides the original one. Attukal Bhagavathy reigns eternally supreme and looks after Her devotees as a mother does her children. Thousands of devotees from far and near flock to the Temple with awe and reverence to prostrate, and seek Her protection.

The Pongala Mahotsavam is the most important festival of Attukal Bhagavathy temple. It is a ten-day programmecommencing on the Karthika star of the Malayalam month of Makaram- Kumbham (February-March) and closing with the sacrificial offering known as Kuruthitharpanam at night. On the ninth day of the festival the world famous Attukal Pongala Mahotsavam takes place.

Only women are allowed to participate in the Pongala ritual. Right from the night before the Pongala day, thousands of women, regardless of religious faith, assemble at the temple premises and on either side of the roads leading to the shrine, to make the Pongala offering. Devotees from across the country and even from abroad participate in the ritual. This is a festival that has figured in the Guinness Book of World Records in 2009, for being the single largest gathering of women for a religious activity (25 lakhs). In 2019 it is estimated that, conservatively, nearly 50 lakh women participated. The rush is so much that women come the evening before, and book their spaces on the road to do their offerings. Spaces outside hotels are pre-booked by the hotels themselves, and given as a composite package to those who stay for this purpose. The city of Trivandrum comes to a complete halt on that day. At the conclusion of the festival, the Attukal Temple chief priest sprays holy water into the Pongala prepared by devotees.

More than 250 priests are deputed to spray holy water to the offerings across the City. It is indeed an astounding spectacle, and you will find many well-to-do, affluent ladies sitting on the side of the roads, preparing their offerings for the Goddess. People, I know in Trivandrum, tell me that it is virtually impossible to step out of the house on that day.

The Attukal Temple is situated near the heart of the city, 2 kilometres away from Sree Padmanabhaswamy Temple, East Fort in Trivandrum. So next time you visit Trivandrum, make it a point to visit this unique temple. 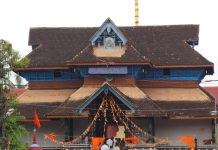 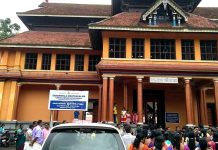 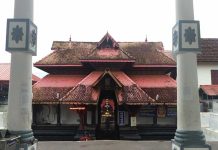